by Jim Sawyer | Knowing versus “Believing” 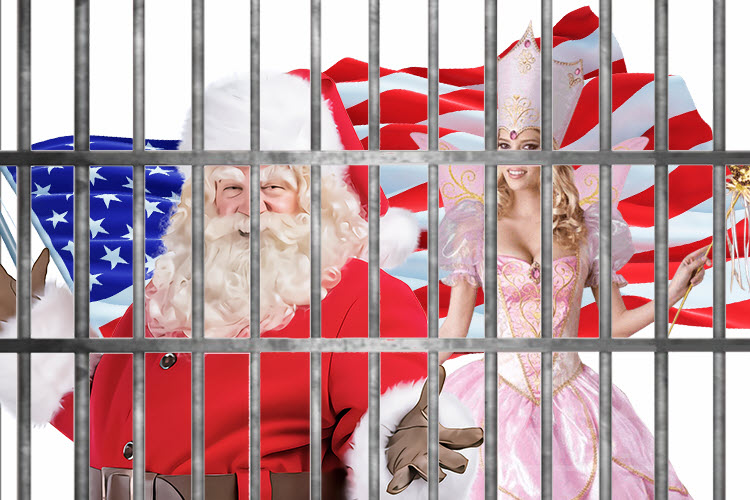 America has a Tooth Fairy problem. It’s related to our Santa Claus problem, and an appropriate name for it might be “Santa Fraud.”

Santa Fraud’s about how many American families fool—even defraud—young children at Christmastime. Why do so many go to such great lengths to convince their children that Santa is “real,” rather than to portray this beloved fantasy character instead, as merely a make-believe “merry old elf?” Santa does not need to be “real” in flesh-and-blood to be “real” in concept. Families do not need to conflate fantasy with reality in such a dysfunctional manner.

Indeed, how might parents move away from so much hoodwinking, toward greater clarification of the crucial distinction between “what’s real” and “what’s mere fantasy?” To get there I believe, first, we must understand what I call “fantasy reification.”

To reify is to treat something “make believe” as if it’s real and not merely an idea. For Santa then, fantasy reification presumes he’s a real human person rather than just an adorable fantasy.

Using the Tooth Fairy as an illustration of the pitfalls of reification, the Sawyer family—three decades ago—lived through an example of fantasy reification “gone wrong.” It’s one that’s touching, perhaps shocking, and culturally tragic, I believe.

When my daughter—six-year-old Ashley—lost baby teeth, Gail and I played Tooth Fairy, but then each morning following, we’d remind Ashley that the Tooth Fairy—who left money in exchange for her tooth—was actually her parents. We were the ones leaving quarters under the pillow of our wonderful six-year-old.

Ditto for Santa. I recall “leveling” with Ashley that Santa was nothing more than just a wonderful fantasy. Second grade is about when kids begin asking important life-clarifying questions that connect them to a better understanding of the distinction between “what’s real” and “what’s not.” About then, it’s crucial for parents to help young children begin to separate fact from fiction, I surely believe. Santa is one appropriate place to begin.

Occasionally our family’s candor did not sit well with the parents of our children’s friends, however. Walk back with me then, to a sleepover at our house in Ashley’s second-grade school year. She had invited a friend. Unbeknownst to Gail and me, however, the friend was about to lose her first baby tooth. It fell out early that evening while the friend was sharing an enjoyable dinner with us.

Ashley’s friend was anxious, being away from her parents at such a really big moment. Gail and I reassured her. But then—she wondered—what about the Tooth Fairy? We also assured her the Tooth Fairy would visit at our house that evening, taking her baby tooth and exchanging it for some quarters she would find under her pillow the next morning.

However, I continued—when Ashley loses a tooth—it’s her parents—us—who play Tooth Fairy—since there’s no actual Tooth Fairy. This happy, lovely narrative is all fantasy, I explained. Later that evening, it would be Jim and Gail who would be stand-ins for her parents. We would be playing Tooth Fairy as we have done for Ashley, and as her parents would be doing for her if the tooth had fallen out at their house.

Once fast asleep alongside our daughter, we carefully removed the baby tooth Ashley’s friend had placed under her pillow, and then replaced it with quarters. The next morning, she was delighted that a “magic person” had left quarters under her pillow. Sadly, however, the situation deteriorated when the little friend returned home, to a debriefing by her parents. Shortly thereafter, Gail took a phone call from an irate mother.

Why had we spoiled a cherished tradition for their family, the mother remonstrated? Why had we made concrete, what their family hoped to keep hidden for another couple of years—that the Tooth Fairy—in actuality—is a fantasy?

Gail assured the distraught mother we meant no harm. Indeed, in our family, we simply wanted to help our children begin to understand the distinction between reality and fantasy, and why that chasm is so crucial and so in need of being understood properly. The highly irritated mother was not impressed, however, and Ashley’s friend was never allowed by her parents to visit our home again. What a sad outcome on many levels.

Then as now, I wonder. If adults are not candid with children about the Tooth Fairy, Santa Claus, the Easter Bunny, and on and on, then are we properly preparing them to be critically thinking adults? What disservice may we be doing to them, as they mature without basic abilities to distinguish between what is real and what is not? Indeed, may the chasm between knowing and believing, eventually become a murky foundation where conspiracy theories are born and nurtured? This is certainly something to consider as we build upon a foundation of ideas throughout our lives. A murky foundation is not a proper one.

There’ll be more posts from me on this and related topics, about the danger America creates when parents fail to distinguish—for our children—the difference between merely believing and actually knowing.