Elders of the Church 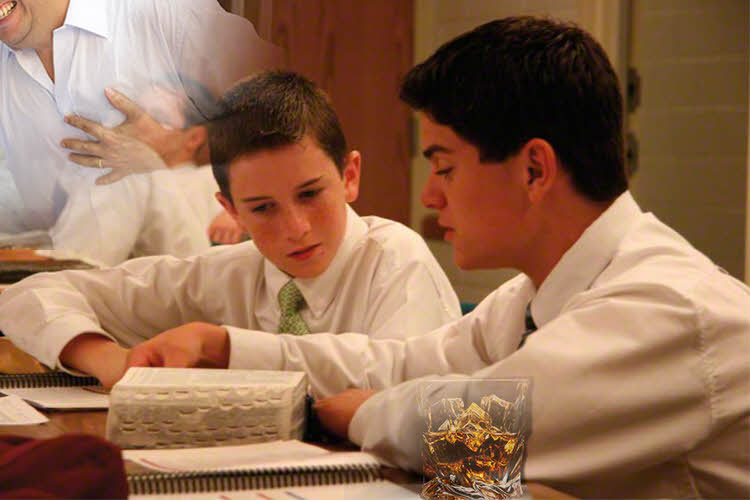 Mormons, aka members of the Church of Jesus Christ of Latter-Day Saints, call their young men “Elders,” but it’s an oxymoron of sorts. In Mormondom, one might ask, why adolescents are propelled so definitively toward adulthood, and what liabilities may arise—as well as benefits—from such rapid transitioning?

One liability is the too-early solidification of beliefs, borne of authoritarianism and bordering on certitude. In my unique experience however, indoctrination didn’t occur at home. Instead, the Sawyer kids got it from nonfamily Church mentors I depended on to salve the family “craziness” I felt acutely in adolescence.

I had it easier than my older brother however, who took jarring family “hits” ahead of me. One involved our cigar-chomping, bourbon-loving paternal grandfather who grew increasingly critical of his grandsons’ Mormon affiliation. Dad—as we called him—hit the floor with a heart attack, in the moment Pete announced his impending missionary service. Medics evacuated him to Ogden’s Dee Hospital where recuperation required a full week, owing to his grandson’s errant choice, he attested. Buss cautioned Pete and Jimmy not to destabilize Dad further with more “Mormon stuff.” Another heart attack, Buss admonished, might cost Dad’s life.

My situation was unique from Pete’s however, owing to birth-ordering, as the second son. Thankfully, grandfather didn’t go down the heart-attack rabbit-hole when it came my turn to serve a Mormon mission. Instead, it was Buss who presented a new and daunting challenge. Members of father’s fraternal brotherhood, he confided, were responsible for the 1844 execution-style slaying of Joseph Smith, Mormonism’s founder. Accordingly, Buss said Smith joined the Masonic Order specifically to purloin sacred ceremonies, and then convert them for use in Mormon temple rites. The Masonic order was never intended to be a religion, Buss remonstrated, as he shared with me what he described as a sacred confidence.

I listened intently and responded respectfully, clarifying that I was not questioning his veracity. Even so, I stood firmly behind my choice to serve a mission, even as my many Mormon friends were doing.

Ironically, over two years in New Zealand, Buss was my strongest emotional support through his frequent, upbeat letters that made no mention of the specific missionary work I was doing. And as Buss might have anticipated, trouble with Mormon authoritarianism began at the outset. On my outbound flight on now-defunct Pan American Airlines—in which the Mormon Church held a reported, substantial ownership stake—I drank a glass of champagne.

Back home, sipping a bit of champagne—unintentionally—would have been a “nonissue.” As a newly minted missionary in an authoritarian system however, I learned abruptly that my slipup would cost someone their job.