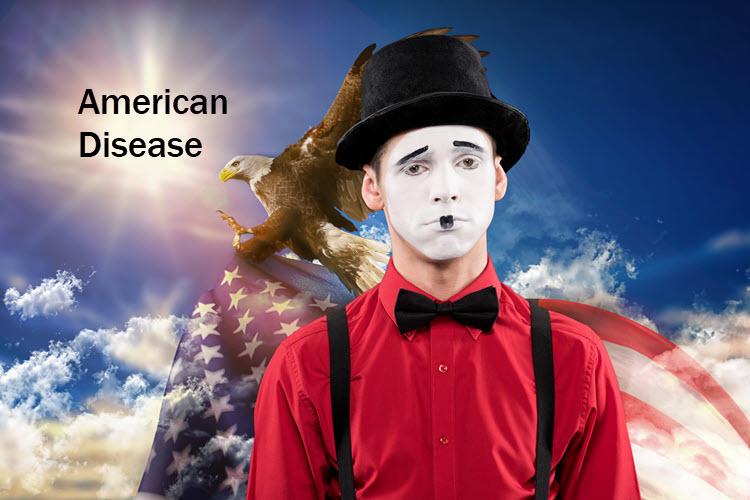 An Introduction to Culture Warfare

“American Disease” is a surrogate name for culture warfare, centered in the dysfunctional, dueling political and religious theaters of Right and Left, so apparent during Donald Trump’s Presidency.

Oddly, America’s brand of culture warfare was birthed outside the United States. It was imported from France following cultural upheaval there during the 1960’s. Post-structuralist philosopher Michel Foucault and others were prominent in defining the internal conflict that ensued. Later, these authors evolved into darlings of liberalism in the American academy. Even so, post-structuralism waned in France, and that philosophy is now viewed as merely contributory to a transient cultural phase; that is, it was an adolescent-type overreaction that never gained long-term traction. Such is not the case in the United States of course, where French Theory—American Disease—has mired our society in profound dysfunction.

Initially starting in the 1980’s, French Theory had a huge impact in history departments where its use included the promotion of multiculturalism, against more Eurocentric narratives steeped in the Judeo-Christian primacy of America’s cultural roots. Feminist narratives—among others—also played a significant role.

Later, conservatives learned to skillfully resist, and then to launch counter-offensives against liberals, grinding the great American experiment in shared academic and political governance into a dueling zero-sum game of checkers. “Own the Libtards!” Or this: “Our opponents lose when our side wins!” Such is the prevailing ethic in which the object is to marginalize the “other,” thereby limiting their capacity to influence America’s future. In sum, American Disease is about sparing—politically and religiously—to gain control of mission—and the ideological vision in which a particular mission statement is anchored.

Methodologically, French Theory uses a one-two punch. First, it deconstructs an opponent’s ideas. Then second, it reframes or recasts the ideas in support of an agenda favored by the proponent’s “base.” For instance, in recent decades deconstruction and reframing are being used extensively by proponents that include Evangelical Christians, orthodox Mormons and traditional Catholics. For each, secularism is the obvious “boogeyman.”

Deconstruction is visualized as disassembly, with inspection and analysis. If one employs a traditional clock analogy for instance, a skilled craftsman can study a particular timepiece to learn how it works (or malfunctions) by disassembling and then reassembling it. The flipside of taking something apart is returning it to a harmonious and functioning whole. With a clock of course, the objective is to tell time precisely.

To explain the second part—reframing—another analogy works better, however. Here, I’m using the criminal murder trial of OJ Simpson, and focusing on the role of the gloves. After subjecting the gloves to careful inspection (deconstruction) before the jury, defense attorney Johnny Cochran demonstrated they were too small to fit Simpson’s large hands (reframing). All Cochran needed to contest and then reframe how the defense team was using them, was this. Said Cochran to the jury: “If the gloves don’t fit, you must acquit.” In doing so, he planted doubt that the jury might be pressing too closely toward the conviction of an innocent person. Of course, Cochran’s ploy worked and OJ Simpson was acquitted.

Alt-right conservatives have become huge producers and consumers of the detritus that is American Disease. This was not always so, however. It was liberals who first imported it to lead a French Theory-based assault on philosophical structuralism in America. In the academic environment of the 1980’s, conservatives accused liberals—perhaps with some justification—of “moving the goal posts” to win cultural arguments favoring feminism and multi-culturalism. (On a personal note, I favor both)

More recently however, conservatives have beaten liberals at their own game, it appears. That is—beyond merely moving the goal posts—alt-right conservatives have ventured further afield, methodologically. One wonders, then. Have conservatives removed the goal posts altogether, and thus displaced the role of liberal academics of prior decades, to become the follow-on proponents of American Disease, with a reframing strategy that now verges on complete cultural relativism?

← The Council Tree Elders of the Church →