Start With What You Know

by Jim Sawyer | Knowing versus “Believing” 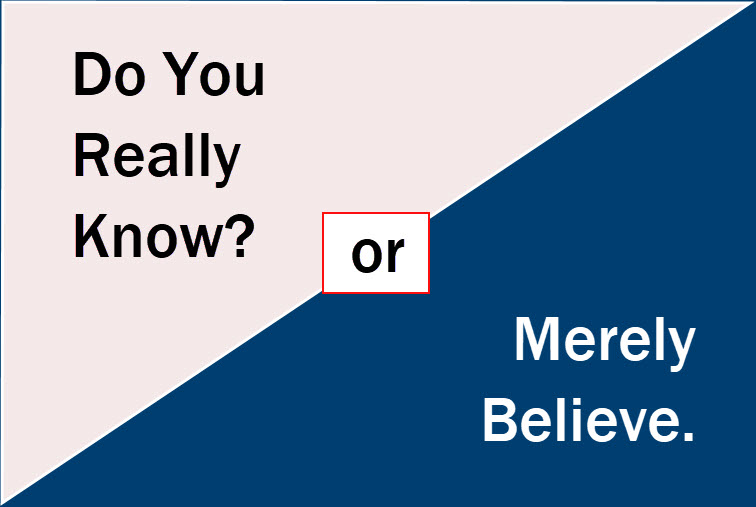 Do you know which you are? Knower or believer? It varies of course, with the proposition encountered. Is your favored proposition, one with a basis in verifiable knowledge? Or instead, do you assert it as reality although it can be defended by little more than belief?

It’s crucial. For all of us. Confusion between when we know and when we don’t, stokes debilitating fires of culture warfare. It is warfare based too often upon false realities, conspiracy theories, disinformation campaigns and so much more. Too often it is warfare that rushes into combat on cable TV or the Internet, certitude-confidant about how the world works, but lacking a solid footing in “knowns.”

Propositions claiming the status of public knowledge must be evidence-based and therefore refutable. They must be innately capable of being overridden by inquiry that is impartial. If full or partial adherence to a particular belief system is required as a precondition for the proposition’s embrace, then it’s one of belief and belief only, no matter how widely it may be supported by like-minded others.

Public Spaces: What It Means “To Know”

Here are some trustworthy “rules of the road:”

These, from Friday’s time, also coincide with “knowns” in our time:

Illustration of Things Believed, but Not Known

These, which also touch upon Friday’s time, coincide with contemporary beliefs. In each, one should be mindful of the gap between “belief” on one hand, and “reality, truth or knowns” on the other:

Among pre-Vatican II and other orthodox Catholics for instance, the Doctrine of Transubstantiation—wherein the host is transformed during mass into the “substance of the Body of Christ”—is belief-based and not based upon objectively determined reality.

Among orthodox Mormons for instance, the claim the Book of Mormon is an actual historical document, is instead allegory touching upon religious mythology. In public spaces characterized by diversity, any such belief-based claim engendering testimonials of “I know this to be true,” in the sense of Karl Popper, is not a valid public truth claim per se. Rather, it is a belief claim supported only by likeminded others who already adhere to an underlying core set of beliefs.

Among Evangelical Christians and other likeminded individuals, claims about so called End Times associated with the New Testament’s Book of Revelations are not knowledge-based, but belief-based instead. Such claims have their basis in allegory, touching upon religious mythology. In the parlance of Karl Popper, End Times is a belief-based proposition, innately incapable—in the present—of being invalidated through objective inquiry.

Conspiracy theories also fit this general category of political and religious mythology. These are belief-based; not knowledge or reality based. For instance, one thinks of Donald Trump’s “Birther” claim that Barak Obama was born outside the United States, or Trump’s unsubstantiated claim the 2020 presidential election was stolen from him.