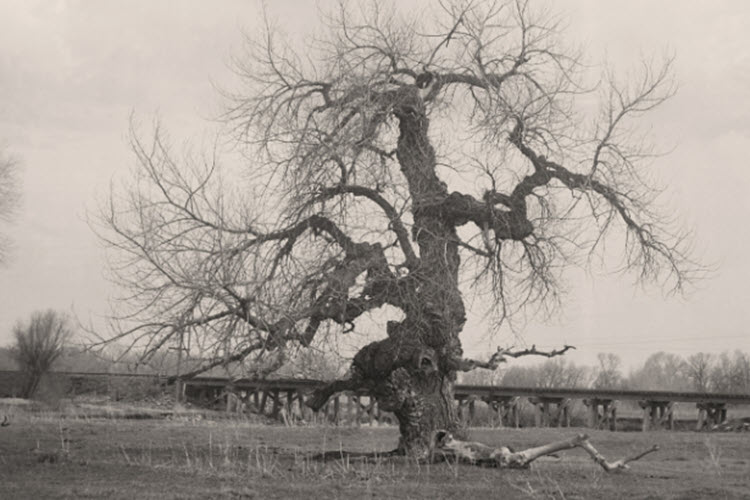 I love the natural scenery along the Cache la Poudre River. In this colorful wonderland, once there stood a revered Cottonwood, known by indigenous citizens as Council Tree. One among them with deep connections to Council Tree was Warshinun, an Arapahoe Indian who became known among White settlers as Chief Friday.

Separated from his tribe as a young boy, Warshinun was rescued by a White trapper who re-named him Friday, since he was found on that day of the week. The trapper sent him to school in St. Louis where he learned English. Then following his return to Northern Colorado, Warshinun aka Friday evolved to become leader of the local band of Arapahos, wherein he led meetings beneath the gnarled 100-foot cottonwood.

Chief Friday’s legacy is that of being an effective communicator and peacemaker among the various tribes, and between Native and non-Native inhabitants of the Cache la Poudre Valley. When asked what they do beneath the Council Tree, he explained to curious White settlers—both succinctly and non-ceremoniously: “We talk,” Chief Friday said.

What does it mean now, for an individual or group to “talk” in the tradition of a peacemaker such as Chief Friday? Some things have changed since Friday’s “time on stage” during America’s Civil War, of course. Others remain remarkably the same, one and a half centuries later. What remains constant in Northern Colorado—and across our land—is the need to coexist—respectfully and peacefully.

Parenthetically, the venerable old cottonwood tree died decades ago. As for Friday, he didn’t fare well when faced with encroachments by White settlers. Eventually, Warshinun migrated and is buried on Wyoming’s Wind River Reservation.

There are two roles demonstrated in this Chief Friday-Council Tree narrative. One is about finding a gathering place in which a tradition of respectful listening and speaking may occur. The other is about ethical leadership that may be on display there.

In contemporary public spaces, a citizen may stand as Chief Friday did, and then present themself as a potential leader and peacemaker. Since these spaces tend to be publicly owned, most are accessible to all citizens for purposes of commiserating, collaborating, and compromising. The list of public spaces is long and includes public libraries, city council chambers, and the Internet. America’s public spaces also encompass our National Parks and other public lands administered by the Department of the Interior.

As in Chief Friday’s day—throughout America’s contemporary public spaces—hope burns brightly that disagreements may be melded into win-win outcomes.

Amid America’s culture wars, how can a Chief Friday-Council Tree-type public culture establish itself and then thrive? Of course, the pathway toward success begins not just in the shade of a metaphorical tree, but in the privacy of each person’s heart. It is here that critical thinking and just action may take root, and where hope may spring eternal that conflict can be transformed into collaboration and compromise.

Therefore, we ought to ask ourselves. Have we expanded our social networks to include people who may not worship and vote as we do, but instead, may vote and worship even as our opponents do? If we have not included them, then we may find ourselves blaring into an echo chamber that lacks diversity and exposure to the full range of problems and challenges comprising contemporary America.

Do we “dig deep” to understand our opponent, and then respond honestly and forthrightly to them, regardless of whatever their “bill of particulars” may be?

In this regard also, do we enter public spaces—such as a metaphorical Council Tree—with humility sufficient to ask this of ourselves?

What might need fixing inside “us,” as opposed to looking for the “fix” we think should be emanating from “the other,” only?

← Start With What You Know Stop American Disease →