Will Cars of Evangelicals Go “Driverless?” 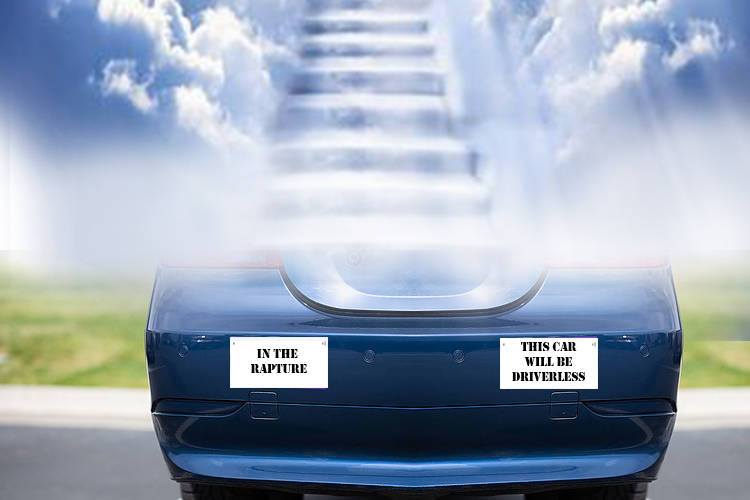 What This Bumper Sticker Implies

When I lived in Seattle several years ago, I was jolted by a bumper sticker on a car driven by someone I presumed to be an Evangelical Christian. “In the Rapture” it proclaimed, “This Car Will Be Driverless.” Indeed, I wondered: was the driver expecting—literally—to be plucked to heaven, while I remained—with others—stuck in traffic and consigned to the darker reaches believed to be reserved for the unfaithful?

Of course, any Christian’s preferred end-of-world narrative depends upon their interpretation of the Book of Revelation. As a rule, conventional Protestants don’t believe in Premillennial Dispensationalism, so they reject the idea that a large segment of humanity will be left behind—on earth—to endure an extended period of tribulation. Premillennial Evangelicals, on the other hand, watch continuously for “signs of the times”—foretelling—to them—the rapture of the faithful is at hand, accompanied by punishment for those who don’t measure up.

Fundamentalists tend to invoke six, thousand-year periods in their timeline, stretching from Adam and Eve to the Rapture associated with the Second Coming. For many—two decades ago—Y2K held special significance. That year—2000—many presumed, marked the end of the so-called sixth dispensation, hearalding the Rapture that the bumper sticker foretold.

At his death in 2016, Tim LaHaye’s obituary appeared in the U.K. Guardian. He was described as a premillennial dispensationalist who—with his co-writer of the Left Behind book series—pitched to Evangelicals, then became a significant American cultural figure among right-leaning religionists. The Guardian quipped, that as an American Baptist fundamentalist, LaHaye did not become raptured into Heaven as he might have anticipated, but instead, garnered the satisfaction of knowing his books were among the most widely read and most profitable in the literature genre of populist theology. His Left Behind series sold an estimated 70 million copies, pushed out by mass-distribution outlets including Walmart.

News service Vox concludes that Premillennialists including Tim LaHaye interpret many contemporary problems as “signs of the times.” These include political corruption, pornography, alcohol and substance abuse, corporate monopolies, labor unrest, desecration of the Christian sabbath, liberal theology, international conflicts, forest fires, earthquakes, epidemics, changing weather patterns (global warming)—and so much more. These are evidence, according to premillennialists, of the correctness of their diagnosis, that our world is rapidly approaching the End Times scenario they champion.

And in America’s increasingly galvanized political climate, the attitudes of adherents are particularly striking, Vox observes. Often, believers identify global political entities with the Antichrist they decry, the United Nations included. In LaHaye’s book series, the Antichrist is the leader of one-world government known as the Global Community. It’s a seemingly peaceful equivalent to the U.N. but operates surreptitiously because it’s in league with Satan. In this narrative, big government and international organizations are viewed with inherent suspicion, thus many Evangelical believers are prime audiences for conspiracy theories, Vox observes.