BRANDON: Let’s Go With What We Know! 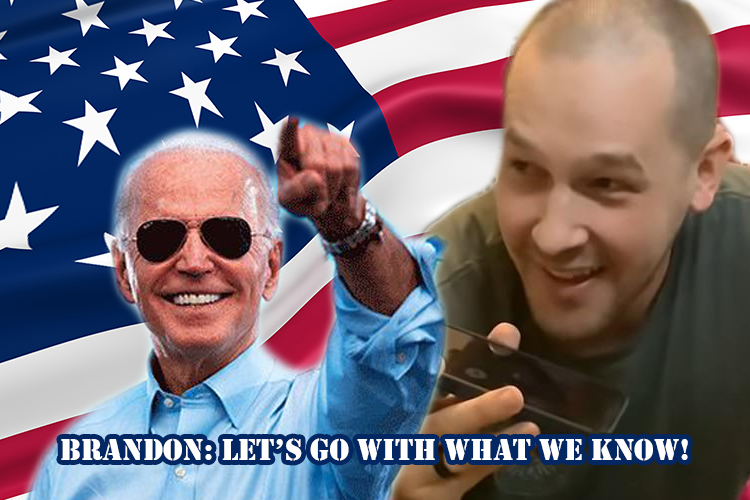 Americans suffered a dive into profane sloganeering recently, connected with the televised win by race car driver Brandon Brown, a bystander.  The strategy—intended by political opponents of Joe Biden to humiliate him—as they carried on behind Brown during his post-win TV interview—continues to garner lots of hits.  The “Let’s Go Brandon” mantra promises continuing popularity with right-wing advocates, perhaps through the balance of Joe Biden’s presidency.

Why not craft a suitable replacement, however?  Hopefully, such a mantra could portray a “functional” America rather than one bringing memories of the democratic sacrifices of our forebearers, ever closer to being cast into the rubbish heap.  And why not a mantra respecting the dignity of others who do not rely upon profane perspectives?

Of course, any suitable replacement should distinguish between what is known, and that which is merely believed.  Rather than “F**K Joe Biden”—which is a belief preference—how about this, instead:  BRANDON:  LET’S GO WITH WHAT WE KNOW!

Do you know which you are? Knower or believer? It varies of course, with the proposition encountered.  Does your favored mantra have a basis in reality? Or instead—as with “F**K Joe Biden,”—are you asserting belief in the face of others, that yours is more compelling than public knowledge, and others’ beliefs, also?

Public spaces should flourish.  These come in many varieties, city council chambers and the meeting spaces of public school boards, included.  Here are some trustworthy “rules of the road” for public spaces, regarding the crucial need to honor the difference between knowing and believing:

These are sacred spaces—democratically.  Start first with “knowns” before moving to beliefs alone.

Public spaces should be welcoming to all, including those with diverse points of view who may come from virtually hidden corners of our communities and our nation.

Respectful listening and respectful speaking in these spaces should outweigh proselytizing.  Guard rails—established through the ethic of common consent—ought to guide proceedings away from the profane.

How Profane Sloganeering Is Short-Changing America

Stephen Marche, a Canadian citizen, is a cultural commentator.  His new book, “The Next Civil War”—has been reviewed by Carlos Lozada of the Washington Post.

Marche argues his neighbor to the South (us) is just one tragic step away from widespread political violence.  What will be the trigger, he wonders?   How might such a crisis unfold?  Has the insurrection one year ago, brought America to a greater likelihood of a violent takeover by a political minority, such as the one loyal to Donald Trump?  Remarkably—and soberingly—Lozada points out that one-third of Americans now report condoning some aspect of violence against government as a justifiable act.

Each of the two sides in this polarized conflict, Marche observes, accuses the other of hating America.  Disillusioned and angry, some are even coming to loathe what historically, America has celebrated as a huge asset: national diversity.  Some who are becoming defiant no longer tolerate what they view as contradictions inherent in the unique character of America’s diversity, Marche concludes.  Therefore, the fight between Reds and Blues is coming to look—ever more—like a fight to control meaning.  That is, according to Stephen Marche, bi-polar America is awash in a fight to (re)assert its particular brand of destiny.

It’s noteworthy for a Canadian writer to conclude by quoting from America’s Founding President about fragilities inherent in our democratic system.  The quote, buried within George Washington’s farewell address, is sobering indeed for present and future aspects of American democracy.  Said Washington: “Cunning, ambitious and unprincipled men will be enabled to subvert the power of the people, and to usurp for themselves the reins of government; destroying afterwards the very engines which have lifted them to unjust dominion.”

Two-plus centuries following George Washington’s retirement, one wonders.  Was Washington’s a prescient window into the actions of the planners, perpetrators, and participants of the insurrection at our nation’s capital on January 6, 2021?

What May Trigger Our Next Civil War

← We're Not Winning Do Dems Have It Wrong? →