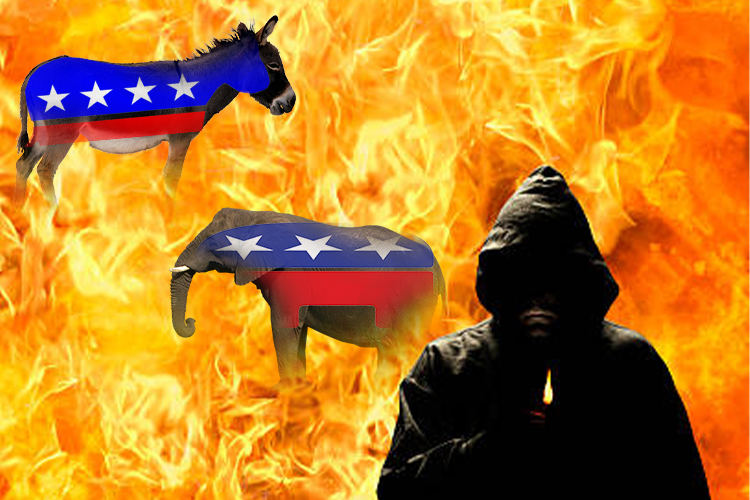 Returning to the perspective of Political Scientist Barbara Walter, one wonders.  In California’s Shasta County, is Washington Post journalist Scott Wilson describing—in actually—attempts to overthrow how the American government works at the local level?  Indeed, is Shasta County becoming a case study of America’s devolution into an insurgency, following the political contours laid out by Professor Walter?

Walter lists three stages of insurgency.  These are drawn, no less, from the CIA manual she references.

Stage One describes pre-insurgency.  It occurs when groups begin to mobilize around a particular grievance. Oftentimes, says Walter, it’s just a handful of individuals who have become deeply unhappy about something, so they begin to articulate their grievances.  And then they begin to grow their membership.

Stage Two describes incipient conflict, according to the Central Intelligence Agency.  It begins when militias and related groups start building what is described as a military arm.  Members begin obtaining weapons, begin training, and begin to recruit former resident members of the military and current and former law enforcement officers.  At this second stage, a few isolated attacks may be occurring, already.  The danger—according to the CIA—which based the manual on actual observed foreign insurgencies—is that even as some isolated attacks are beginning, most community members remain unaware of the coming danger.  “Connecting the dots” hasn’t occurred yet.

In Stage Three and the final stage, an open insurgency is occurring. At this stage, Walter observes, there begin to be a series of consistent attacks, and eventually, these become impossible to ignore.  Members now recognize the need to sustain their movement by adding experienced soldiers and supporting resources, so they shift to aggressive recruitment.  Because the United States has been engaged in a series of long wars in the Middle East, many returning servicemen are available to join if they find compatibility with a particular insurgency, ideologically.

On The Ground In Northern California: A Case Study?

Scott Wilson is a senior national correspondent for the Washington Post, writing about far-right militia groups.  One wonders.  As he describes California’s Shasta County, is he also describing, simultaneously, a run-up to the type of pre-World War II-era German political insurgencies, feared by Barbara Walter’s father?

Wilson observes that the far right is now rising in the ranchlands of Northern California, using special elections and veiled intimidation to gradually eliminate traditional Republican elected officials and to spread this new political influence across a historically conservative region of a deeply blue state.  Their gains have come at the expense of historically moderate Republicans, he observes.  Gradually, the influences of Republicans who previously advocated, mainly for “small government,” are being eroded away.

The militia movement has been building in this region for about a decade, Wilson observes.  Then it took a leap forward in the wake of California’s pandemic-related mask regulations, then fused with Donald Trump’s groundless 2020 election fraud claims.

In Shasta County, what will the fledgling Trumpist movement do with its new-found political muscle, Scott Wilson wonders?  It is unclear, he says.  Already clear, however, is that a sharp new political edge is being crafted by the far right’s leadership.  What is being diminished simultaneously he says, is civil interactions that had been stewarded previously by moderate Republicans.  Civility is disappearing, he concludes, even as political agendas are changing.

The alt-right, backed by the local militia, now pays particular attention to Black activism, gun rights, and public rules perceived as preventing businesses from operating free of government supervision.  This revulsion with COVID-related regulation, took hold particularly in the wake of right-wing revulsion to mask mandates.  In this, there is some similarity with the contours of the Governor Gretchen Whitmer kidnapping trial, in Michigan.

”The effort is already spreading,” Wilson observes.  “In Nevada County nearby, an angry electorate has accused its Board of Supervisors of ‘crimes against humanity’ for imposing mask mandates and using pandemic infection tracing. A petition drive is underway to recall the entire five-member board.”

Back in Shasta County, there are plans to contest the office of the registrar of voters, says Wilson, which is normally an unchallenged position.  Because of Donald Trump’s unsubstantiated election-fraud claims, it has garnered newfound importance.

One wonders, then.  Where does America go from here, in the post-President Donald Trump era?

Is faith in American institutions being revitalized under current leadership by President Joe Biden and the Democratic-led Congress?  Or is trust eroding evermore?  What would it take to “turn around” America’s declining faith in her institutions?

Why are many conservative voices criticizing President Joe Biden as being “weak” or “soft” on Russia in his leadership against the armed invasion of Ukraine?

Do American conservatives want a “strongman” such as the role George W. Bush played, post 9-11?  Does Donald Trump also model this strongman role?  Can President Biden govern effectively without playing such a role?

Explore some similarities—and some differences—regarding “liberties” sought by Republicans on one hand, and Democrats on the other?  Which vision of liberty is likely to prevail in America’s future?  Please elaborate on your choice.

American politics have been shifting under Republicans, from a focus on issues to a focus on the politics of identity.  Republicans see a parallel with Democrats and its Party’s focus on Black Lives Matter.  Witness, for instance, the Donald Trump-led Republican Convention in the run-up to the 2020 election, which largely neglected discussion and debate about issues, and focused instead on identity.  What is the hope, if any, that America may be able to return to issue-driven politics?

Regarding the insurrection at our Nation’s Capital Building, January 6, 2021, what has America learned, if anything, about the causes and consequences of insurrection, and also about possible hope for unity in America’s future?

Can America avoid civil war?  If so, how will it do so, specifically?

Where Are Political Extremists Taking This Country?

A Far-Right Militia in California